I have some budget-related questions for you that involve a potential tax rate increase, an effort to hire more police officers, our use of COVID relief money, and a summary of budget items impacting Ward 7.

First of all, regarding the schedule, this Monday we are holding a special Council meeting starting at 10AM, rather than our usual 7pm. This is so we can ensure we have adequate time (and alertness!) to go through each of the proposed budget amendments. Once we vote on all of the amendments, the budget will then likely be put up for another public hearing on Friday the 10th (another unusual meeting time with our meeting starting at 5pm, this is because of a conflict we have on the following Monday), before we hold our final vote at either that meeting or on the 27th. So, you will have ample opportunity to comment on the amended budget prior to passage.

I’ll first start with the amendments that would impact Ward 7. I am proposing around a dozen amendments, and the key ones are the following:

The other amendment I want to get your thoughts on involves a proposal to increase the tax rate in order to fund police recruitment enhancements. As you may be aware, we have been having difficulty recruiting enough police officers. I know that some don’t want more armed officers, and I myself am wary of this, but the fact is that our current officers are working double shifts to cover for the vacant positions, which is impactful on their ability to do their jobs and our ability to in turn retain officers. What was negotiated with the Police Union, and recommended by the Police Department, is a 20% increase in police salaries to boost recruitment. I support this enhancement as we need to boost recruitment. However, this 20% increase has a significant cost attached to it: $2 million. Keep in mind we have a current and projected budget structural deficit where our expenditures (primarily staff costs) exceed our revenue. The chart below shows how the red expenditure are greater than the green revenue. Currently, this 20% increase is NOT funded through a tax rate increase. 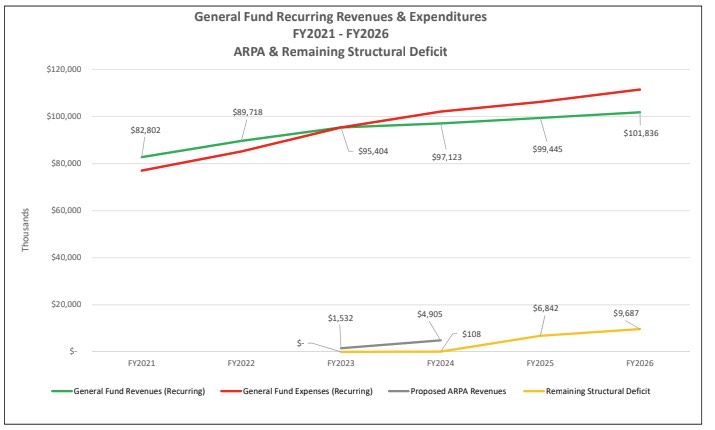 The plan is to balance our budget and pay for the police enhancement without a tax increase, and instead utilize COVID relief money, and the budget proposes to do this until FY25, at which time that money runs out and we will have to make one of two choices: 1. Cut staff/services to reduce expenditures, or 2. figure out how to generate more revenue by either raising taxes or convincing the State to give us a portion of the sales tax collected in Annapolis.

Regarding #1, I’ve been on the Council long enough to know that we’ve already cut most of the easy things that are available, such as contract services, supplies, and training. The only things left to cut are staff, which also means a reduction in services. We could also look at merging our transit system with the County, and/or merging our police and fire departments with the County. These would take time to analyze and determine feasibility.

Regarding #2, raising taxes, we could increase taxes by 3 cents per $100 of assessed value, which would bring in roughly $2,000,000 in revenue and cost the average taxpayer an additional $110 on their annual tax bill. The downsides of this are obvious, but the upsides are that it would cover the police enhancement and help to address our targeted deficit. If we enhance police recruitment without a way to pay for it, it will catch up with us in two years. We saw this happen years ago when we utilized a federal grant to hire half a dozen new firefighters, and then were left holding the ball when the grant ran out in a few years; hence the 6cent tax increase we passed back in I think 2018.

Regarding the sales tax, I’ve already requested a Resolution asking the State to consider giving Annapolis a portion of the sales tax collected in the City.

So my questions are:

I’m asking for your feedback because I have not yet decided what to do. I do have an amendment handy that would increase the tax rate to pay for this police increase. Not because I’m sold on the idea, but because we as a Council, and community, need to have a discussion about this. The Financial Advisory Commission also stated that we need to address this deficit. We need a plan to do so and a plan to pay for the police enhancements long-term. These are the things that we need to address and start discussing, which is why I’m contemplating this amendment.

This has been scheduled for June 18th. If you would like more information you can find it here.

Petition to save Greenbury Point

As you may have read in the newspaper, the Navy Golf Association floated the idea of expanding the golf course to Greenbury Point, which would remove that natural area. Some community organizations started a petition that you can sign if you are opposed to the expansion.

This video was referenced at the last Ward 7 Town Hall event so I’m posting the video here. 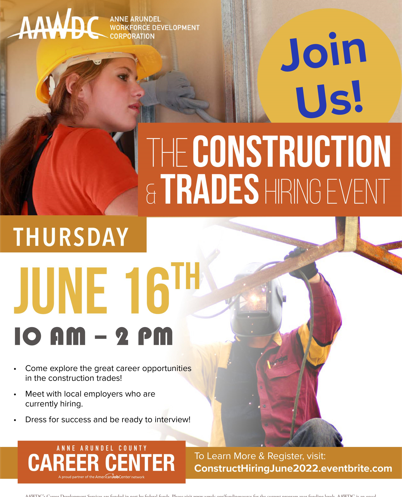 I’m proud to endorse and support Steuart Pittman for re-election as County Executive. His hand has been steady through COVID, and he has done more for the environment and to deal with out-of-control over-development than the past 4 (at least) County Executives combined. I hope you will consider supporting him as he visits Ward 7.