Happy Spring Equinox everyone! I for one am definitely looking forward to more sun and warmth, and fun in the water. Here are a few updates for Ward 7. Of note is information about our next Town Hall, where we will discuss the results of our survey results from our last meeting, the Sector Study, and hopefully will hear from the Mayor himself on some of his initiatives.

The next Ward 7 Town Hall will be on Wednesday, April 3rd, 6pm at the Eastport-Annapolis neck library. I will be presenting on the results from our last Town Hall where we brainstormed and ranked our top issues for Ward 7 and the City. I’ll also likely give you an update on the Eastport-Forest Drive Sector Study developments. I have also invited the Mayor to come speak about some of his initiatives, including his plans for a new Public Works building (the current one is demolished) at the intersection of Hilltop and Forest Drive and the downtown ULI working group efforts.

The Forest Drive-Eastport Sector Study (a planning document seeking to amend our 2009 Comprehensive Plan to help guide development in the future, for better or worse) has been remanded back to the Planning Commission for further discussion, since most on the Council were not comfortable with officially adopting this Study to be a part of our 2009 Annapolis Comprehensive Plan. The reasons vary, but the bottom line is that many of us saw various components that we thought needed more development or that we were not comfortable with. In particular, we all agreed to the need to look at affordable housing issues in the City more. The reason it was remanded so quickly is because it was discovered that according to City law, if no action was taken by the city within a certain number of days, it would automatically become part of our 2009 Comp plan. This letter gives us more time to deliberate. We do plan on continuing the discussion about the Sector Study in our committee process, to identify specific amendments or other areas of the plan that need yet more work. This will continue at many but not all of the Committee meetings, depending on the inclination of the individual Chairs. I will be continuing the discussion at my April 17th (3pm) Environmental Matters Committee meeting. At the last Environmental Matters meeting, we even discussed the idea of not adopting this Study as an amendment to the 2009 Comp Plan, and instead simply using it as a starting point of the discussion and preparation for the 2020 Comp plan. I’m not yet sure if this would entail simply not adopting the Resolution at all, or if we modify it to simply not be adopting the Study as an amendment to the 2009 Comp Plan. Regardless, it is good that we are having this discussion about development in the City.

You may note on the agenda that there is a motion to withdraw the associated Resolution R-45-1. My understanding is that it is being proposed to be withdrawn because it has been remanded and a withdrawal will us more time to determine how/if to proceed.

Mayor Gavin Buckley has announced the schedule for upcoming community meetings to gather resident input on priorities for hiring a new City of Annapolis Police Chief. The public is welcome to attend.

These community meetings, facilitated by community leader Bishop Craig Coates, will all be in Annapolis and begin promptly at 7 p.m.

The Mayor and other key officials will be present at each community meeting. Once the selection criteria have been established through the community meetings and input from the interview panelists, the City will advertise the position.

The panel will then begin interviewing qualified candidates.

The search process for a new Chief will likely take 60 to 90 days.

Study on the economic impact of rising sea levels

A new study, titled Rising Seas can Hurt Local Economies was recently published by Stanford University’s Woods Institute for the Environment. The study looks at the impact of sea level rise and nuisance flooding on the City of Annapolis and on local businesses. Findings will help inform City planning on this critical issue. 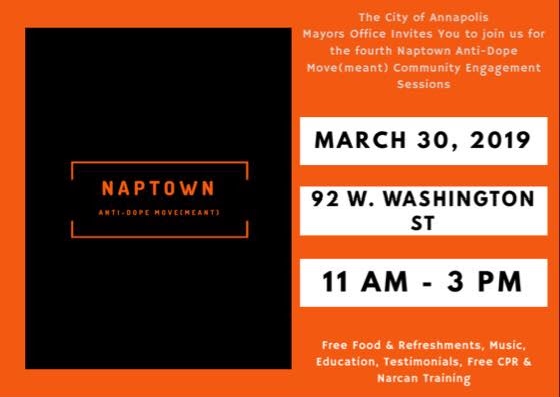