I want to give a big thank you to those of you who helped with flyering for the Town Hall meeting. We had a good turnout with some new faces.

There are a few pieces of legislation up for a public hearing tomorrow: one being the budget and the other being an Ordinance that would change our zoning to allow cannibus stores to be opened in the City (pending state law changes to allow more permits).

Also of note is that the Annapolis Neck Peninsula Federation is hosting a community meeting at the library to discuss the County’s proposed PAL park expansion. The adjacent and downstream community have a few concerns they would like addressed. The community meeting will be on May 31st at 7pm.

Lastly, I wanted to let you know about a fundraiser supporting the re-election of County Executive Steuart Pittman that will be held in Ward 7, at Caliente Grill on June 7th at 7pm. This fundraiser is being hosted by former Ward 5 Alderman Jared Littman and our former Ward 7 Alderman Ian Pfieffer. I am proud to support and endorse Pittman for re-election. He has proven more than capable to bring us through COVID, and also lived up to his campaign promises to address over-development in the County. He has absolutely been the best County Executive for the environment since I’ve lived here (in the past 22 years).

This Council meeting is starting at 7pm and will be televised on local cable, YouTube, Facebook, and the City website.  You can submit public testimony at http://www.annapolis.gov/testimony. This will be an in-person meeting.

As far as my summary, I think it’s a very responsible budget. We are utilizing some of our leftover COVID relief money that we saved from last year, and I believe we have still more we are saving for next fiscal year, in case we need it. Most of the relief money is being used to prop up our public transit system, which has historically operated at a loss. As a side note, we need to figure out a new transit system that serves our entire population, including our tourists. We also need to speak to the County and the regional mass-employers (such as the Mall) to contribute to our system.

This budget does have a minor structural deficit, which we hope to overcome entirely in the future. This deficit is being driven by rising staff costs, primarily pension increases. These increases were due to the previous administration not fully funding them, so we have been playing catch-up, and we hope this levels out over the next few years.

I’m still working on my final list of requested amendments, but they will include the addition of a crosswalk on Edgewood Rd near Tallwood Rd (between Mariner’s Point and Mariner’s Landing), improving the sidewalk next to Ellen Moyer Back Creek Park (Maritime Museum campus), as well as installing a new sidewalk on Bay Ridge Ave adjacent to the Shell gas station and the Mt Moriah AME Church. I’m contemplating a number of other ideas that I will brief you on once finalized.

As far as Capital Improvement Plan highlights, this includes the replacement of the Hillman Parking Garage, bike trail/infrastructure improvements, traffic and roadway enhancements, street end park and waterway improvements, and of course our Program Open Space contribution to the purchase of Carrs Beach Park.

I am looking at possibly increasing a few fees associated with development. There is a proposal by the Mayor/DPW to add an additional environmental compliance/stormwater inspector to ensure that developers are not polluting our waterways during/after construction. Think back to the pollution we had enter Quiet Waters Park. While I think this position is needed, I do not think that taxpayers should be paying for this. If this position is there to police the developers, the polluters, than the polluters/developers should be the ones to pay for it. So I’ll likely increase the environmental inspection fees and grading permit fees, and maybe create some new ones.

As a follow on to the discussion at the Ward 7 Town Hall re: the Peninsula Park (PAL) Expansion, you are invited to attend a community meeting hosted by Annapolis Neck Peninsula Federation, on Tuesday, May 31, 2022   7-8:45  p.m.  at Eastport-Annapolis Neck Library, Community Meeting room. The organizers want to hear from you. You will get an update on the County's plans as well as citizens’ concerns from Rob Greve, a member of the Annapolis Neck Peninsula Federation.   If you have questions, please contact Mr. Greve at [email protected] If you are unable to attend, please contact Mr. Greve for more information.

You view a summary of the issues here.

I’m proud to endorse and support Steuart Pittman for re-election as County Executive. His hand has been steady through COVID, and he has done more for the environment and to deal with out-of-control over-development than the past 4 (at least) County Executives combined. I hope you will consider supporting him as he visits Ward 7. 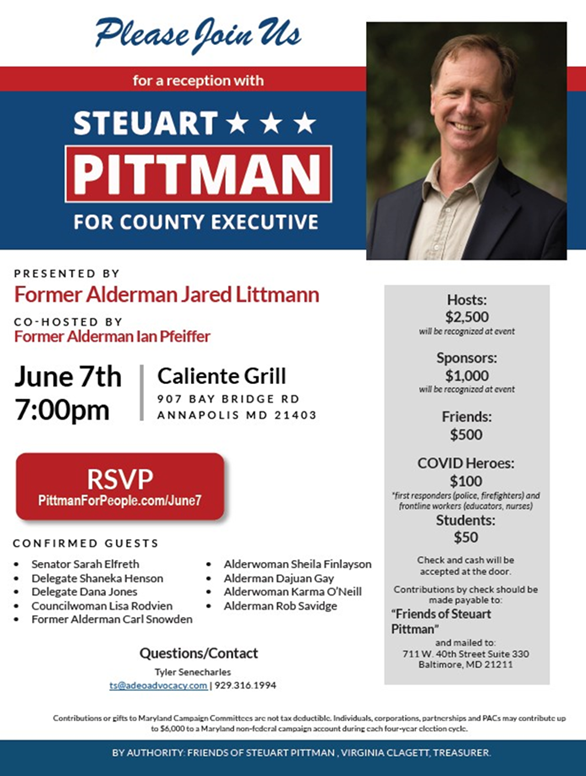